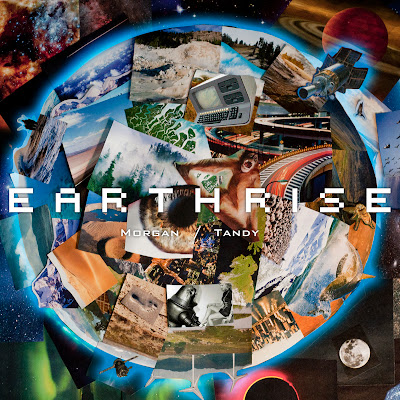 Originally released in the USA in 1984, Earthrise was an album by Richard Tandy and David Morgan, recorded and released after they finished touring as members of The Electric Light Orchestra. As a result of an interview with David for Rock Legacy, Tandy and Morgan felt the time was right to collaborate on a special edition re-issue CD on Rock Legacy Records. At Richard's suggestion, the billing has been changed to Morgan Tandy, to reflect David's role as songwriter, instrumentalist, vocalist and co-producer of Earthrise Special Edition.

Go to "Mission Control" for details and updates.

Here is an excerpt from the original interview:


Now to return to Earthrise, and the Tandy Morgan album and how Richard and David got together: The album was mainly recorded in England, after David joined ELO to do the Time tour, which began in 1981. The Earthrise sessions finished in 1983. Dave continued to tour with ELO until the band quit live performances in 1986. For Rock Legacy, David Scott Morgan, who wrote the words and music, described how the album came about:

DSM: Richard and I hung out together in the early days back in Birmingham and I used to spend a lot of time at his house recording stuff. We were in several groups together and eventually he joined ELO but he remembered me when he came back to Birmingham and we ended up doing Earthrise. At the time I had this lovely little keyboard called a Korg Poly Six. I stuck a drum box in the back of it and then started messing with the arpeggiator! And out of that came the riff that you hear on Zero Zero, - the song was written around the riff!

The Third Planet is done almost completely through a Vocoder, with me picking the tune out on a keyboard while I sang it. Jeff (Lynne) had made the Vocoder popular with Mr Blue Sky and at that time it was a new instrument. When I first started the tour with ELO we had three backing singers. We were in Los Angeles rehearsing our set and I just happened to play a chord on the Vocoder, and mix my own voice in with it, and Jeff heard this chord and to cut a long story short, we lost the singers and with the help of the Vocoder, Kelly and I did all the backing vocals. With Third Planet, I imagined I was some kind of machine, with a soul; a machine that was able to think. And this machine was thinking, “I’m stuck here on this planet, with these crazy humans, and they’re going to blow the place up”.


I was very pleased with Princeton. The introduction is Earthrise in a minor key. Richard played that on the front of it. I was in a group with a guy named Jim Cleary, and we played in pubs and do a lot of harmony stuff. Jim was a great songwriter and we used to make some great harmonies together. I really loved this little group and then it folded up and really, I know this sounds daft but I was so sad, I wrote Princeton about that group folding up. You would never know it from the lyrics, but that is what it was about.

RL: Tell me a bit more about the album as a whole.

DSM: Well Earthrise started with a medley of songs I had done. They are all connected up in some way or form. Then Richard continued with the themes, and of course the whole album was a joint effort.

RL: You obviously work well together.

DSM: Richard is probably the best support, for people who create stuff that anybody could ever have. He’s been at Jeff’s side since day one, and without him, ELO records would probably not have turned out the way they did. I’m not taking anything away from Jeff, they’re all his tunes and his singing, but just having Richard around is special. He’s just an amazing guy. When we were working together, he very rarely put his foot down about anything but if he did, it was worth listening to. I can think of one song that we were working on that had a bit in it with no words, just a tune with ‘Ah’s’ over the chords, and Richard was emphatic: “You’ve got to have some words for that bit”, and I was saying: “No, it doesn’t need words there..”. But Richard just persisted so I wrote some and tried it and – well he was right! It worked. So I always listened to what he had to say.

RL: Lets go on to the next track, Secret. How autobiographical is that?

DSM: Every time I hear that I find it challenging. Every time I listen to it I think how could I have put that together and not really taken account of what I had written.

The title track, Earthrise, was done on a four track recorder in a house in Birmingham and then it was lifted on to the 24 track in the recording studio. I don’t think anything was added to it. We spent ages trying to do that again but we couldn’t do anything that matched the feeling that it gave. We tried to do a high fidelity version of it but in the end we went with the feel, rather than the fidelity.


With Under the Blue and Asteroid, again, a lot of it was done before we got to the studio. What we did was we put all the singing on it and did a lot of tightening up – it didn’t sound as nice as that.

One Thousand Worlds. That’s Bob Wilson playing the guitar riff and then I played it backwards and stitched it together. Quite a few people popped in and did something on the album. The drummer, Jim Simpson actually played the guitar on Zero Zero. Martin Smith played on the last track.

Spaceship Earth – the keyboard was done on a Korg Trident synth. I stuck a drum trigger in it and we found we could do that little lick.

Earthrise was an album that stalled commercially because of what amounted to poor marketing and lack of subsequent airplay.

RL: What, essentially was the problem with the marketing? Was it a company failure or an individual or something else? Where it was initially released? Did it get airplay?

DSM:You asking that question caused me to revisit the conundrum. Really it all revolves about our manager at the time (the man who financed and owned EarthRise), Brian Leahy. He began shopping it at a big major to begin with and after a while, he told us they had 'passed on it' and that he was 'pitching' it to other labels. To cut the story, nobody he presented it to wanted to 'bite on it'. Eventually he told us he had a deal with a new company in San Francisco. They were just a tiny label, no more than a couple of guys working out of an apartment. And that's where it got released.

I know one of the negatives was the fact we were a 'studio band' and the fact it cost a lot to make and so Brian was looking for big advances to recover the costs (initially) but apart from that, it's as much an unanswered question to me now as it was then!

Dave eventually bought Earthrise and now owns the rights to the album and the songs. It was re-released and is sometimes available to collectors. 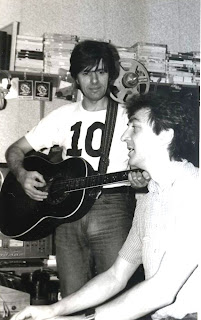 Martin Smith. Guitar on "Secret" (not credited on re-issue CD due to error.)

Rock Legacy writes:
Pull the plug on your ear-player and get out the old stereogram, for this deserves to be heard BIG. Earthrise is symphonic rock, with interwoven themes, leitmotivs and often complex and lush movements. It is also pure high quality pop, of the kind that is massive in Europe and practically non-existent in the UK, cf, The Alan Parsons Project, who never got airplay here (and still don’t) but who are huge in the rest of Europe and the US. It is not surprising that the Europop feel of Scott Morgan’s work, which is evident here, was attractive to Sandra Ann Laur and her de facto Guru, Michael Cretu, the man behind Enigma. (Sandra recorded "Hiroshima" written by Morgan and it became a big hit in Europe) It is no surprise of course that there is an ELO sound in places, since as Dave says, ELO would never have been the same without his partner, Richard Tandy. Morgan’s voice cannot be underestimated; sometimes Dylanesque, sometimes quite calm and pure, and then again funky or rocky. If ever there was a case of a vocal being an instrument, this is it, especially when it is mixed by a vocoder. The album is a testimony to what can be done with relatively sophisticated technology when it is under the complete control of master musicians. It has overtones of Alan Parsons, ELO, Jean Michelle Jarre and Klaatu (the creators of Calling Occupants of Interplanetary Craft). As a whole, it is an album you can listen to from beginning to end, and you know, you can still do this, in high-fi, in-room stereo.

Email ThisBlogThis!Share to TwitterShare to FacebookShare to Pinterest
Home